Boards Behaving Badly and Domineering CEOs is an upcoming Carmichael and The Wheel event, being held on November 16 from 14.30 – 16.00. This is a free event and is being held as part of Charity Trustees Week. Book your place for this event here.

Our expert panel will be discussing the sensitivities and difficult situations of when things go wrong between the Chair/board and the CEO.

People tend to join a registered charity to change some part of the world for the better. Whether we are the paid CEO or the unpaid Charity Trustee sitting on the board, we believe that we take a wholly professionally approach to our respective roles. But what happens when things go wrong, behaviours are bad and people get hurt?

At the core of ‘governance’ is a balancing act of ‘power’ between the board and the CEO. Like any relationship of power, the optimum way to manage it well is through clarity and the mutual understanding of roles, authorities and the availability and regular use of channels for both communications and feedback.

This builds trust and constructive relationships. But these methods need to be used and worked well in order to bring about a productive working environment. Issues around authority, responsibility and accountability are too often obscured in charities through the lack of clarity, understanding and the absence of well worked channels for communications and feedback.

Additionally, the ‘magic ingredients’ for any relationship to work well (i.e. emotional intelligence, empathy and self-awareness) can be missing or only one-sided. The result far too often is that trust breaks down, people get hurt and even seriously traumatised by their experience. This applies to both CEOs as well as Charity Trustees (most often the Chair).

Our panel has many years of experience dealing with people in these really difficult situations where it gets personal. They have seen real trauma resulting from what can only be called an abuse of power.  This can happen on both sides of the board/CEO boundary.

The learning outcomes from this session are:

Deirdre is a highly experienced senior executive across the nonprofit, charity and commercial sectors. She has over 25 years experience working at national and international level in charity and nonprofit organisations. She the leader of Ireland’s representative and support organisation for community and voluntary organisations, charities and social enterprises since its founding in 1999. Deirdre is very motivated by working in mission-driven organisations.

Justin served for twenty years as CEO of Trócaire. He left Trócaire in 2013 and retrained as an Executive and Business Coach. He mentors senior managers in the not –for –profit sector, both in Ireland and internationally and brings a wealth of experience, skill and knowledge to his coaching role. He is Chair of Social Justice Ireland, and a board member of a number of other voluntary organisations. He is Convenor of SAGE – Shankill Action for a Green Earth, an ecumenical community initiative to counter climate change.

Debra has been the CEO of the Directory of Social Change (DSC) since 2001. She is co-founder and first Chair of the Small Charities Coalition. She is a Trustee of In Kind Direct, and the Berkshire Community Foundation. She is an Africa Advocacy Foundation Ambassador for women and girls at risk of or affected by Female Genital Mutilation (FGM) and other harmful practices. She is a Licensed Practitioner of NLP.

Her experience includes: board development; campaigning; policy development; sales, product development, media relations and training. She spent 14 years as a voluntary Trade Union Officer. She spent a year working with Youth at Risk, a charity that works to rehabilitate young people who suffer severe social disadvantages. She was the first female Programme Director of the Runge Effective Leadership programme.

She is an internationally published author of books covering topics such as leadership; management; communication skills; personal development and time management. Recent publications include ‘It’s Tough at the Top’ for Chief Executives and ‘The Pleasure and the Pain’. She is experienced in media, doing TV, radio, newspaper, magazine and internet features and interviews.

She was a regular columnist for a major national newspaper on work-based issues and writes a regular column for Third Sector magazine. She is a renowned public speaker delivering keynote speeches every year to the voluntary, private and public sectors on topics such as relationship between the state and charities; leadership and topical issues affecting the voluntary sector. She has a BSc (Hons) in Psychology; a Certificate in Natural Sciences (Physics; Chemistry; Earth Sciences; Biological Sciences)

Jillian van Turnhout has successfully held a variety of leadership roles in Ireland and the EU across business, public affairs and voluntary sectors. She has served as a Director, CEO and Public Representative and has built a strong public reputation for integrity and sound judgement.

Jillian’s governance expertise emanates from over twenty-five years serving and chairing Boards along with her recognised accreditation as a Chartered Director (IoD UK), the INSEAD International Directors Programme and an Institute of Directors Certificate in Company Direction with distinctions in governance, strategy and leadership. Jillian’s current Board work includes serving on the Board of The Arts Council; as Vice-Chair (Director) of European Movement Ireland and Trustee (Director) of One in Four.

In addition, Jillian chairs the Governance Committee of One in Four and is a member of the Governance Committee of the World Association of Girl Guides and Girl Scouts (WAGGGS). She is a former Chief Executive of the Children’s Rights Alliance; former Chief Commissioner of the Irish Girl Guides; and former President of the National Youth Council of Ireland. Jillian has been awarded the Chevalier de l’Ordre National du Mérite by the President of France and an Honorary Fellowship by the Royal College of Physicians of Ireland.

Diarmaid has been CEO of Carmichael a leading specialist training and governance support body for nonprofits in Ireland since 2011. He also has been a Board Member, Chairperson and Company Secretary on a number of boards in both the nonprofit and for-profit sectors.

Diarmaid  previously worked as a management consultant for over 25 years with Prospectus Consultants and Accenture working with a wide range of organisations in the public, healthcare and nonprofit sectors on strategy, organisation structures and corporate governance. He is also a former civil servant having worked the Departments of Social Welfare and Finance.

Book your FREE place for this event here. 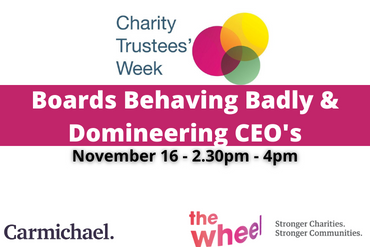