ADHD Ireland will end the year on a high note, hosting a comedy night hosted by Karl Spain on December 18. The stage will suitably remain virtual, as has been the case for the majority of 2020, with the show kicking off at 9pm.

Hosted by the brilliant Irish comedian Karl Spain, the night promises a fun-filled show of laughs from start to finish. The Limerick native, Karl Spain will MC the show, with the likes of Paul Marsh, Aka Mr Dead Sound, and Patrick Monahan will be among the tight-knit line-up.

For just one hour the comedy night promises to bring joy to the audience in a year in which we all badly needed a laugh. What’s even more good news about the event, it will be completely free to be part of the audience! To register for the event just visit this link.

The line-up may not be huge given the short show in store, but it is not short in quality! For example, Spain appeared at the Montreal Just for Laughs comedy festival in 2003, which was later repeated on RTÉ Television. He is a regular at the Kilkenny Cat Laughs comedy festival. Spain later ran a series on RTÉ entitled Karl Spain Wants a Woman. He appeared as master of kung-fu on the fifth series of Killinaskully in October 2008.

Patrick Monahan meanwhile is an Irish-Iranian comedian, who won the television competition series Take the Mike in 2001 and Show Me the Funny in 2011. He has performed regularly at the Edinburgh Festival Fringe.

Paul Marsh is an award winning Comedian from Tipperary. He arrived on the Irish comedy scene in 2011 by winning Ireland’s biggest newcomer award, The Capital Comedy Competition and He followed this impressive start up by supporting some of Ireland’s top comedians like Neil Delamere, PJ Gallagher and Karl Spain.

ADHD Ireland, a resident Carmichael organisation, provide vital supports and research for the ADHD community in Ireland. This event will be a great opportunity for the community to come together let off some steam following a tumultuous and testing 2020.

To follow all news and events from ADHD Ireland make sure to follow them on social media; you can find their Facebook here, their LinkedIn here and their Twitter here. Finally, don’t forget – to be a part of the virtual audience for the event just visit this page. 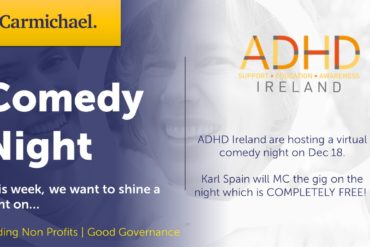