In each edition of the trustees’ quandary, we will look at a real-life challenge that a Board has faced and consider a range of responses.

For an example of a previous Trustees’ Quandary, see below:

Michael has been on the Board of a mid-sized charity (and CLG) for four years. At the beginning of his tenure, he felt meetings were collegial and friendly. Michael felt the charity was in a healthy position based on reports to the Board. He thought they were in good hands with a long-standing Chair and CEO.

Six months ago, Michael joined the Audit and Risk Committee (ARC). In addition to Michael, there are two external members and the Board Chair who also chairs the ARC. As a member of the Committee, Michael began receiving detailed financial reports including cash flow statements which raised concerns. Upon further probing, Michael could see they were spending more than they were receiving in income.

Michael asked the Chair of the Board who said it was a blip in their operating model, they provided services to a significant number of clients and therefore received state funding. State funding had declined over the past few years, as their contact point had changed. The Chair advised the CEO was handling the situation and it should be remedied soon.

Two months later, at the yearly meeting between ARC and the Auditors, the auditors repeated their concern about the precarious finances of the charity. At this stage, Michael realised the reserve fund that was in place when he joined the Board was now depleted and had been used to mask the shortfall in income. The wider Board had not been informed of the previous warning from the Auditor or the use of the reserves.

Michael is right to be worried. A key part of the director’s responsibility is to ensure long-term financial stability, monitor the use of funds, ensure that controls are in place and discuss the organization’s financial information to ensure financial accountability.

Three aspects of this situation are particularly worrisome:

My advice to Michael is that he needs to start by setting up a meeting with the Chair as soon as possible to set out his concerns, and to seek agreement that full financial data will be shared at the next board meeting, and the issue of overspend versus income and depletion of reserves will be given the time needed for proper examination and discussion. There needs to be full transparency of exactly what is leading to the overspend (a phrase like “Operational blip” is not satisfactory!) and how and when the CEO and executives propose to remedy the situation. If the next board meeting is a long time ahead perhaps a special board meeting needs to be held.

Hopefully the Chair will agree to this approach – if not Michael may have to talk to fellow directors to strengthen his hand. This is too serious to ignore, and Michael will be failing in his duties to the organisation, and as a nonexecutive director if he does so.

The fact that the Chair of the Board is chairing the ARC, that adequate financial data is not being given to the board and the hint that there may be a degree of collusion between the Chair and the CEO makes me fear that there may be other aspects of corporate governance in this organisation  which may not be in line with best practice. I would be suggesting to Michael that he proposes to the board an external board evaluation which will audit the overall corporate governance and help the organisation to get back on track.

Jean Callanan is a Strategic Consultant and Change Maker. She is Chair of Irish Hospice Foundation and a Director of An Bord Iascaigh Mhara.

Michael needs to establish the rate at which the organisation is getting through its reserves to establish if they are insolvent. He now has a responsibility to report his findings to the rest of the board and to inform their funders of the ongoing situation.

It’s concerning that an ongoing financial report isn’t being presented to the Board at least 4 or 5 times a year at meetings. The Board have signed off on the Annual Financial Report without appearing to have all the information. It could be that they haven’t been given the training that they require in the roles and responsibilities of directors of a charity. However, even acting in good faith, this doesn’t absolve them of their responsibilities. You can’t make an informed decision if you don’t have all the information.

The auditors should be getting in front of the directors at least once a year, but this hasn’t happened. If this has been actively blocked by the Chair and CEO then Michael needs to take hold of the situation and get the other directors on side, and they need to look at the process of removal of the Chair from their role as director.

For the medium term, assuming the charity isn’t now insolvent, they need to develop a business plan to establish whether they are sustainable or not. The continuing role of the CEO in this needs to be established because the future of the organisation is under threat and has been for some time under their leadership.

This is a matter of significant concern as the company is at risk of / is trading recklessly. Michael and other Board members have had access to four sets of audited accounts that show diminishing public funding and diminishing reserves.  Auditors have brought these matters to the attention of the committee at least twice and it is unwise for the committee to ignore these concerns.

Michael should ask the Chair to convene a special meeting to discuss finance.  If the Chair does not agree he should seek the support of other Board members to convene meeting.  The external members of the ARC should be invited to the meeting and briefed on the key agenda item.

Michael, as the only Board member on the ARC apart from the Chair, needs to present the current concern to the Board. He may speak with the CEO or members of the finance team to fully understand the issue.  The first task is to ascertain whether the company is currently trading recklessly.  If it is, or is close to doing so, urgent action needs to be taken including getting legal and financial advice.  In this case, this should be the only item on the agenda.

Once that key concern has been addressed, there are other issues to be tackled:

Lots of charities have solvency challenges at some time.  The test of the charity is how these are managed.

Anna Lee’s work has focused on addressing poverty and social exclusion.  She currently chairs ActionAid Ireland and is a Board member of Focus Ireland and St Stephen’s Green Trust. 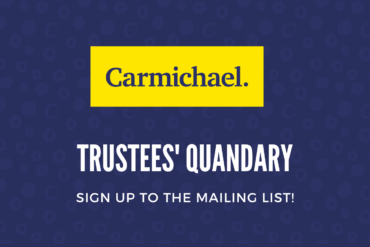